Pyramids for the garden and agriculture
Photo in the header : Yannick Van Doorne in front of the greenhouse in the shape of a large glass pyramid in the botanical garden of Sydney, Australia, January 2013. On the right, energy vision test with the Nev system of Harry Oldfield, during a visit to his home in England in September 2012, Yannick poses with an agnihotra plaster pyramid. We can see the very powerful energy field emanating from the pyramid.
On the middle photo of the pyramid greenhouse, we can see an energy ball at the head of the pyramid. This is a real photo and this energy field is so strong it can be seen in the photo.
This page aims to inform you of the different possibilities with the pyramids for mainly agriculture and the garden, and secondarily some other applications that can be very useful, such as for energy, health and well-being.
When a farmer or a gardener calls me and tells me he wants to test electroculture but tells me that he does not have much means, then I suggest that he use a pyramid. The investment is minimal and the results can be huge, especially on an entire farm scale!
noopener noreferrer” data-original-title=”” data-iframely-checked=”1″> 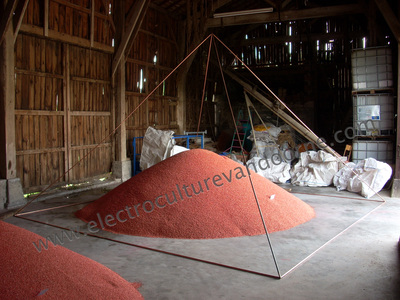 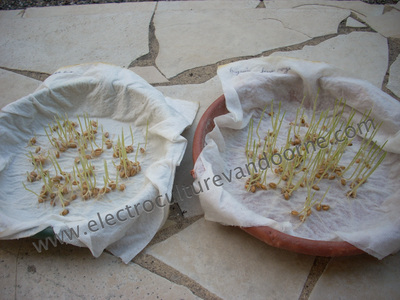 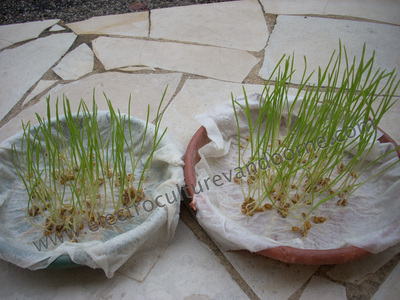 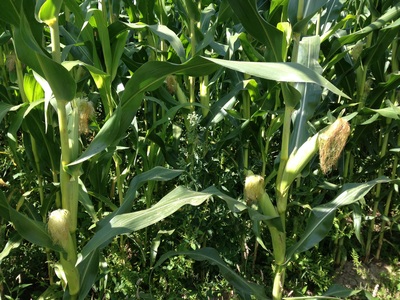 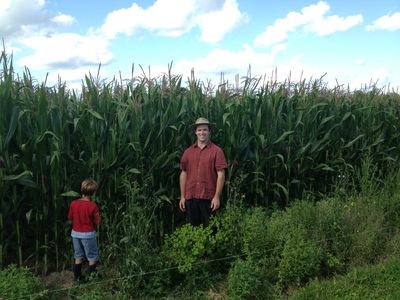 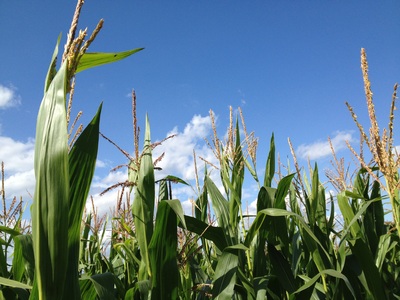 Scientific research on the effects of pyramids

Testimonial test pyramid on potatoes
Garden in Stotzheim, Alsace, France. 2011
After returning from a conference and meeting trip around pyramids, geobiology, free energy and electroculture in Canada , I decided to do this little test, although it is already too late in the season to plant potatoes to be able to hope a satisfactory harvest. There are still the natural cycles of plants to respect before anything else.
Potato plants are subjected in a pyramid for 2 days. They were planted very late in the season, which is not optimal for a potato plant, which usually results in not much. Here is the test.
First photo: Treatment June 4, 2011. 6 plants in a pyramid for 2 days and 6 untreated control plants.
Second photo: Measure July 24, 2011 . A first plant is observed in front with the meters of the control group, height about 20 cm, and at the rear the height of the plants of the pyramid group of about 80 cm. All 6 plants were equally large in the pyramid group and just as small in the control group.
Third photo: Harvest September 21, 2011 . On the left 4 potatoes from a control plant. Right 22 potatoes from a plant having undergone 2 days of treatment under the pyramid before planting.
That same year Charles Hubbard of Canada harvested as many as 137 potatoes from a plant that grew its lifespan in the energy of a pyramid.
noopener noreferrer” data-original-title=”” data-iframely-checked=”1″> 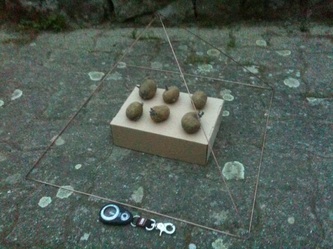 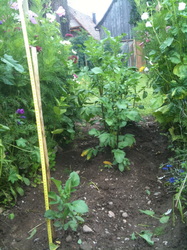 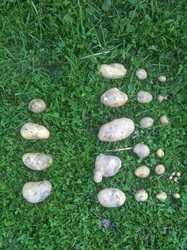 Since this test above, several farmers told me that they obtained excellent harvests following a treatment of their seeds by a pyramid. You just have to place the seeds, bags and big bags for a few days (or even several weeks if the weather allows it) in a pyramid and then simply sow them as usual. This can be done in the sheds at farmers’ homes.
A Russian specialist on pyramids, Mr Uvarov, gave me a testimony from a farmer who treated stones in a pyramid for two weeks and then spread them in these fields. He was able to double, or even more, his harvest of sunflowers and beets.
In Central America,Even today, some Mayan Indians still go every year with their seeds on the pyramids for better harvests . It is an ancestral technique that we have forgotten nowadays but which works very well. The results attest to this and what “official” scientists do not understand does not matter and simply demonstrates the degree of ignorance and dogmatism of current official science.
Pyramids are an effective solution to many agronomic needs. Farmers can benefit greatly and thus improve their harvests, crop health, their well-being as well as their finances, thanks to the use of pyramids. In addition it does not cost much considering the results that 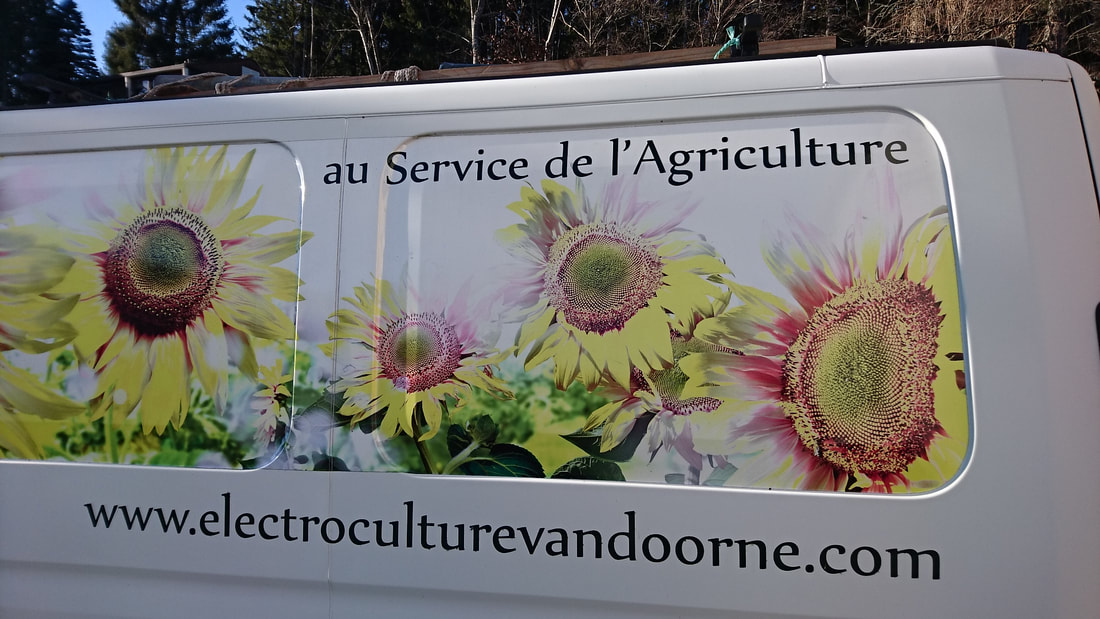 Here is the result of a pyramid test of potato plant dynamization
at a farmer, Mr Lecarpentier
On the left harvesting control potatoes
On the right harvesting potatoes whose plants were boosted under a copper pyramid before planting.
In this test example, the result is not impressive but still not negligible.
A pyramid is an interesting crop improvement tool for a ridiculous investment, it would be wrong to do without it.
While knowing that in general the results are much greater still. 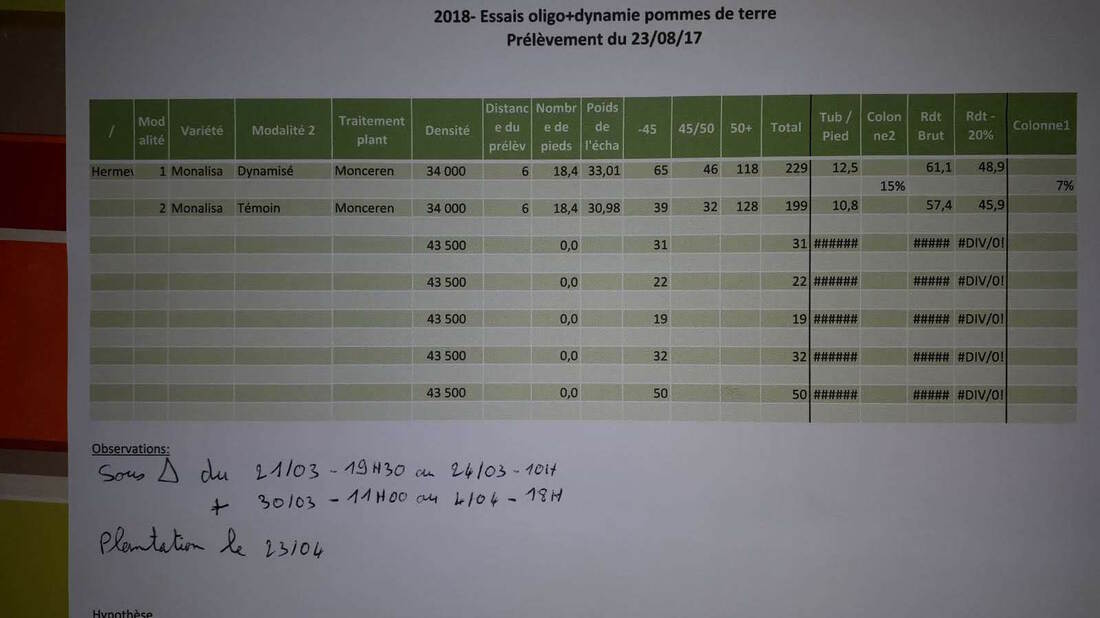 Some photos of the practical use of pyramids in agriculture
Pyramids are generally used for:

Market gardeners and farmers with a few to hundreds of hectares of crops thus see their results and income increase significantly with the simple use of a copper pyramid.
Once you’ve tested it, you see the results, you approve it and you can’t do without it. Because why earn less when you can earn more while preserving the environment, increasing harvests, results and above all quality!

Testimony of J. Guirand of his use of a copper pyramid in the garden
Sector: South of France (2016)
He testifies: About 15 good potatoes per plant.
Vigorous and shiny foliage, deep green almost bluish?
No watering and we see the potato plants very green under the pyramid compared to the vegetation around yellow withered from the drought.
For carrots, radish, turnip we see each time an example of under the pyramid compared to the control.
Discover here some photos that speak for themselves.